Most Americans would prefer to think of China as a friendly nation with a different political and economic perspective of the world. That’s certainly how the current occupant of the White House sees China—at least, that is what he says publicly.

Privately, he may have other reasons for viewing China and its autocratic leader, Xi Jinping, that way.

Think Hunter Biden and his various sketchy deals with the Chinese Communist Party.

Think of the “Big Guy” getting 10 percent of some illicit multi-million-dollar transaction with China.

Who knows what the Chinese have on Joe Biden that makes him so compliant when it comes to China?

While the U.S. remains committed to a freewheeling form of capitalism and a democratic system of government where power (for the most part) is lodged with an informed (one hopes) citizenry, China remains a largely closed society with a political system ruled by an elite Communist politburo that prefers to manage the nation’s economy and control access to information.

True, both countries seem to be benefiting from two-way trade, though the Chinese had a $676 billion trade surplus with the U.S. in 2021. Meanwhile, U.S. consumers are told they are benefitting because they are buying products made in China for much less than what they would cost if made in the USA.

The problem is while Americans might like to think of China as a friendly nation, it is becoming increasingly problematical to do so, given China’s ongoing behavior.

First, there is China’s reluctance to reign in North Korea–a client state that remains a buffer to non-Communist South Korea and the American military presence on the Korean Peninsula. One wonders how many more ICBM missiles must fly over Japan before China finally decides to rap Kim Jong-un’s fat little knuckles. Perhaps when one of those missiles inadvertently slams into Manchuria.

Then there is what appears to be China’s secret cyber war against the United States. Not long ago, for example, the Internet security firm McAfee revealed a widespread attack against 72 organizations, including the United Nations, U.S. defense contractors, and several other corporations, in what a McAfee executive called “the biggest transfer of wealth regarding intellectual property in history.”

It didn’t stop there. More recently, some 48 chemical and defense companies were victims of a coordinated cyber-attack that has been traced to China, according to the security firm Symantec Corp.

Computers belonging to these companies were infected with malicious software known as “Poison Ivy,” which was used to steal information such as design documents, formulas, and details on manufacturing processes, Symantec said recently.

While Symantec did not identify the companies, it said they included several Fortune 100 corporations that develop compounds and advanced materials, along with businesses that help manufacture infrastructure for these industries. Most of the infected computers were located in the US and UK and included companies that developed advanced materials used in military vehicles.

McAfee warned that hackers working in China broke into the computer systems of five multinational oil and natural gas companies to steal bidding plans and other critical proprietary information.

Computer hackers, possibly from the Chinese military, interfered with two U.S. government satellites four times in 2007 and 2008 through a ground station in Norway, according to the Congressional Economic and Security Review Commission. Security experts say the Chinese are continuing their satellite meddling today.

U.S. military and intelligence agencies use satellites to communicate, collect intelligence, and conduct reconnaissance. While the Commission doesn’t accuse the Chinese government of conducting or sponsoring the four attacks directly, it says the breaches are consistent with Chinese military writings that advocate disabling an enemy’s space systems, and particularly “ground-based infrastructure, such as satellite control facilities.”

U.S. authorities for years have accused the Chinese government of orchestrating cyber-attacks against adversaries and hacking into foreign computer networks to steal military and commercial secrets. Assigning definitive blame is difficult, the Commission says, because the perpetrators are adept at obscuring their involvement.

Nevertheless, China this year “conducted and supported a range of malicious cyber activities,” the Commission’s report charged. Evidence emerging this year tied the Chinese military to a cyber-attack on a U.S.-based website of the Falun Gong spiritual group, among other attacks.

Should we be surprised? Not really.

There are tens of thousands of Chinese students at America’s best universities, earning doctorates and postdocs in computer science and information technology. When they complete their studies in the U.S., many return to China with their U.S. degrees and improved skills. Some remain in the U.S. as covert operatives who funnel intelligence, corporate secrets, and other valuable information back to the CCP. 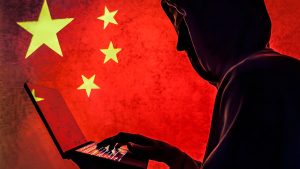 Most of the world’s computers are made in China, and it has been suggested that ‘malware’ – viruses and malicious ‘worms’ could be hardwired into the millions of computer chips being manufactured in the Far East. If so, the Chinese wouldn’t even need to use the Net to mount an attack; the enemy is sitting there already, right on your desk.

“What’s going on is very large-scale Chinese industrial espionage,” says Richard Clarke, a former top U.S. government official who held roles in counterterrorism and cyber-security and now is chairman of Good Harbor Consulting, a security and risk-management company in Arlington, Va. “They’re stealing our intellectual property. They’re getting our research and development for pennies on the dollar.”

Then there is the issue of the Covid-19 virus which has now been traced back to a lab in Wuhan, China, as well as the thousands of pounds of lethal fentanyl that the Chinese export to Mexican cartels so they can poison Americans.

Did Joe bring any of this up with Xi during their meeting last week?

What about it “Big Guy?” Does Xi have you in a chokehold?

What message does Biden’s reticence send to the Chinese? The answer is simple: keep stealing from us, keep poisoning us, and keep up the cyber-attacks because our president has been compromised by the CCP. 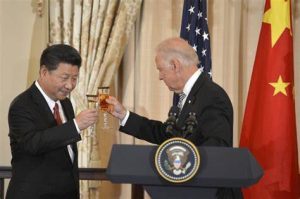 While such a move would risk escalating tension and might invite retaliation from the Chinese, Clarke says it’s better than rolling over while corporate R & D and intellectual property is stolen and the U.S. does nothing about it.

There is little doubt that America is at risk–not only from traditional armies and military equipment but from digital warfare and espionage.

And if Americans still prefer to believe that China is nothing more than a friendly economic competitor, as Biden insists, they had better wise up fast. We are facing a new kind of warfare, and China is the primary adversary.

China is stealing our secrets, our technology, and our intellectual capital at a rate unseen in history. And if we continue to let it happen, there is little doubt that the American Empire will soon be on a respirator.

Some people believe it already is.