A long time ago, a Pulitzer Prize-winning Kansas editor named William Allen White wrote an editorial in the Emporia Gazette entitled “What’s the Matter with Kansas?”

In it, he railed against obtuse populist politicians and visionless citizens who he was convinced were running Kansas (my home state) into the ground.

If White were around today, there is little doubt that he would be inveighing against the descendants of those thickheaded populists, some of whom have morphed into today’s Political Correctness Thought Police. I strongly suspect that he would already have written an editorial entitled “What’s The Matter With America?” in which he takes the PC Gestapo, cancel culture, and the woke crowd to task.

For those of us who utilize words for a living, the idea of someone telling us we can only use words that the PC Police and the woke mob have decided are “correct” is not only an attack on our ability to express ourselves using the tools (words) of our trade, it is an attack on the First Amendment that guarantees, among other things, free speech.

For the first time in our history, Americans must be afraid of what they say, what they write, and what they think. Today, we must be worried about using words the PC Police have determined are offensive or insensitive.

Do so, and you are liable to lose your job or be accused of being racist, sexist, or homophobic.

Sadly, universities, with their “speech codes,” are the biggest proponents of this political correctness–and, as such, are becoming opponents of the First Amendment.

The very institutions that should be marketplaces of ideas by fostering uninhibited discussion and speech are becoming more and more restrictive in an effort to promote inclusiveness and encourage tolerance.

Take the recent example of the University of New Hampshire.

In its new “Bias-Free Language Guide” posted on the University’s website, using the words “American,” “obese,” “normal,” “mothering,” “fathering,” “homosexual,” “illegal alien,” and “senior citizens,” is offensive and should be discouraged.

Even the word “American,” the guide said, is “problematic” because it “assumes the U.S. is the only country inside the continents of North and South America.” Really? 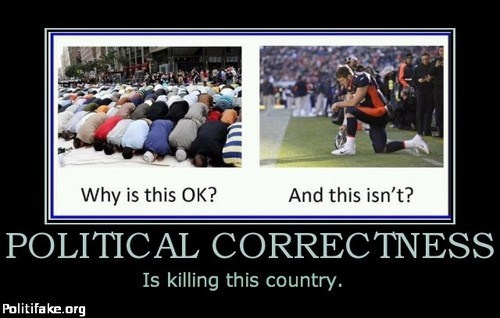 Calling those who unlawfully cross our borders “illegal aliens” is also not PC. Undocumented immigrants are not “illegal.” They are “persons seeking asylum” or “refugees.”

Furthermore, the word “foreigner” should be replaced with “international person.”

Are you kidding me?

Take a look at other examples of this political correctness run amok in the University of New Hampshire’s Language Guide:

Those who have read George Orwell’s book “1984” will know that this is the 21st Century’s version of “Newspeak.”

Newspeak in Orwell’s dystopian novel was “a reduced language created by the totalitarian state as a tool to limit free thought and concepts that pose a threat to the regime such as freedom, self-expression, individuality, peace, etc. Any form of thought alternative to the regime’s construct is classified as “thoughtcrime.”

Sound familiar? It should. This is exactly what the Political Correctness Gestapo is doing today.

And it begins in the White House.

The former Obama administration once banned all U.S. government agencies from producing any training materials that link Islam with terrorism. In fact, the FBI has gone back and purged references to Islam and terrorism from hundreds of old documents. Amazing. 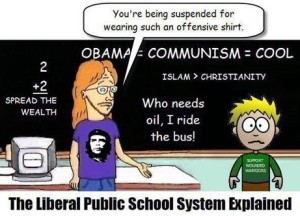 As Orwell once said: “In a time of deceit, telling the truth is a revolutionary act.”

Here are a few more recent examples of this kind of PC insanity since Joe Biden took possession of the White House.

At a high school in California, five students were sent home for wearing T-shirts that displayed the American flag on the Mexican holiday of Cinco de Mayo. (This was California, right? Not Baja California?)

A Washington state college said its “non-discrimination” policy prevents it from stopping a transgender man from exposing himself to young girls inside a women’s locker room, according to a group of concerned parents. What next?

According to the Equal Employment Opportunity Commission, it is illegal for employers to discriminate against criminals because it has a “disproportionate” impact on minorities.

Speaking a few years ago at American University, William Lind, an author, and journalist, said: “America today is in the throes of the greatest and direst transformation in its history. We are becoming an ideological state, a country with an official state ideology enforced by the power of the state.

“In “hate crimes,” we now have people serving jail sentences for political thoughts. And Congress is now moving to expand that category ever further. Affirmative action is part of it. The terror against anyone who dissents from Political Correctness on campus is part of it. It’s exactly what we have seen happen in Russia, in Germany, in Italy, in China, and now it’s coming here.

“And we don’t recognize it because we call it Political Correctness and laugh it off. My message today is that it’s not funny, it’s here, it’s growing, and it will eventually destroy, as it seeks to destroy, everything that we have ever defined as our freedom and our culture.”

Are we to assume political correctness will fade only after the “gravitationally disadvantaged lady has sung?”

George Orwell must be hooting from the grave.

(NEXT, PART 2): HOW LENIN USED PC TO SHAPE THE MINDS OF RUSSIAN SCHOOL CHILDREN