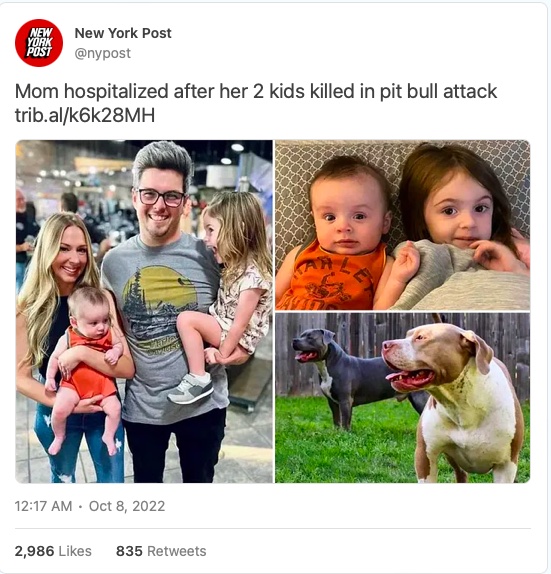 I saw this in the strangest way possible the other day as a story was circulating about two children who were killed by their own pit bulls in their homes.

Obviously, this topic would spark debate as to how dangerous these dogs are. Some on one side of the matter state pit bulls are just as dangerous as any other dog who isn’t properly trained and the other side state how these dogs have been bred for hundreds of years to purposely be aggressive.

So what do pit bulls have to do with black people? Exactly. Nothing. However, that didn’t stop people from finding a way to use black people as a comparison to defend a dog.

We know the crime statistics and I’ve even discussed the reality of how stark they are for the black male population in relation to violent crime. Some people want to avoid this but I don’t because you can’t change what you don’t acknowledge. However, at the same time, I don’t make this an inherent issue as if black people, just by the existence of having darker skin, make us violent.

There is a multitude of factors that play into this like the impact of missing fathers leading young men to find male leadership through gangs, and how missing fathers in the home impacts how young men regulate their emotions and enforce the importance of boundaries.

But none of this has anything to do with a dog, but it didn’t stop people from attempting to use black people as a debate tool.

People who were trying to make an argument that we are inherently violent just by sheer blackness and people trying to say that if you believe that a pit bull’s statistically high proclivity to attack humans as being due to breeding, you wouldn’t use this explanation for examining the black male’s disproportionate violent crime rate.

Both of these statements are racist, plain, and simple. Why? Well, here is an explanation I gave to one of these pit bull owners who felt the need to inject black people into the conversation:

News Flash @MichaelWLanier1: Dogs and Black people are not the f***ing same.

There are breeds of dogs that were specifically bred for hundreds of years to do one specific thing. We have hunting dogs but you wouldn’t argue that hunting dogs don’t exist or all dogs can hunt. pic.twitter.com/uUepYCh033

Their defense is that nothing bad has ever happened to them and that his 6 y/o paints the dog’s toenails. Mind you, this person is making an argument and injecting black people to defend a fucking dog while having a black wife.

Just because your daughter paints your dogs damn toenails, doesn’t change the fact they are an aggressive breed.

Btw, I’m sure your black wife wouldn’t like it that you use black people to defend a f-ing dog. https://t.co/sj5BE79cwe

This is just one of many random comments made to defend pit bulls while throwing black people under the bus at the same time.

They think they’re making a noble gesture but the truth is they’re weaponizing a demographic of people to defend an animal and they’re ultimately equating us to dogs.

I’ve seen this tactic used in a variety of situations where people feel the need to bring up black people when we have zero to do with the situation. Why? Because it’s their reflex and I believe it tells us what they really think of us. Some people hate black people and some pity black people but confuse their pity as being empathy.

So, I’ll end here. If you compare black people to dogs, you’re a racist